On my last post, I asked if anyone could guess what animal I planned to make with this quilt.
The two clues were:
1.  It lives outside
2. When it speaks it asks a one word question.
Dayna guessed an owl and...
She was right!!!

Here is a photo of 2 of the 4 quadrants laying next to each other.  I still have no idea how I am going to join the four finished quadrants, but Dee of Deeroo designs promises me that if I trust her, she will show me the way.  I guess this means I have to trust her! 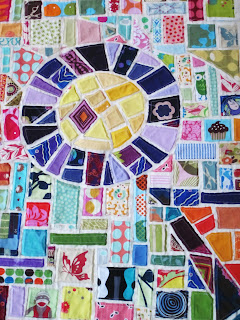 Here is a close up of quadrant #2.  I used a pencil on the plain white top fabric to draw the eyes and nose.  It helped having that as a guide.  Dee also said to leave a 1/2 inch of space along the sides, so I drew that 1/2 inch border with my pencil as well. 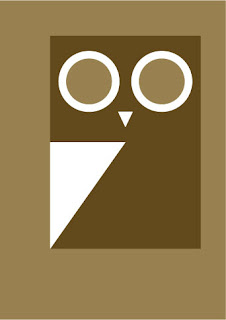 When I started this quilt, I knew I wanted to incorporate an owl into it somehow.  I wasn't sure how I was going to do this so I started scouring flickr for inspiration.  I searched "owls" and within a few pages this little cutie appeared.  It was designed by eberfdias.  I sent him (I think it is a him) an email message via flickr asking him if he would mind if I used his design as inspiration for this quilt and he said he would be honored.
What do you think so far?
~Val
Posted by ~ Val @ PinkPlease! ~ at 7:19 PM 7 comments:

Crazy Mom Quilts.
Hopefully, you've all heard of Amanda Jean and have followed her in amazement as she creates new and amazing quilts.  The Ticker Tape Quilt was one of her incredible inventions.  It has become such a huge hit that it is now part of Dana @ Old Red Barn Co's 9th Quilt-Along.  You can follow all the progress of everyone involved on flickr.  The ticker tape quilt is a way to use up itty-bitty scraps by arranging them in a mosaic pattern on top of an already pre-sandwiched quilt.  Pre-sandwiched, is that a word? 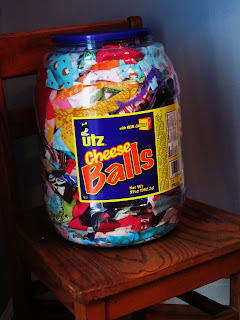 For the past year or two, I have been saving all my scrap fabric.  I wasn't aware that I was supposed to save my scraps until one sewing evening, Lindsay said to me as I was throwing them away, "WHAT ARE YOU DOING?"  "Um, I'm throwing away my trash."  "Don't you know you should be saving those to make a CrazyMomQuilts Ticker Tape Quilt!!!?"  From then on, I've saved each and every one.  (Unless it is too microscopic and then I give it to Lindsay).  I save the scraps in an old Cheese Ball container from Sam's Club.  I took my "Cheese Ball" to my first Indianapolis Modern Quilt Guild meeting because we were making wonky blocks from our scraps.  They thought my container was hilarious.  I guess I never thought anything about it until then.


Ok, back to the Ticker Tape Quilt.
I have decided to join the Quilt-Along and I am so glad that I did.  I think the ticker tape quilt has become a new obsession of mine.  It is addicting, to say the least.  Here is a reveal of the bottom left quadrant of my quilt. 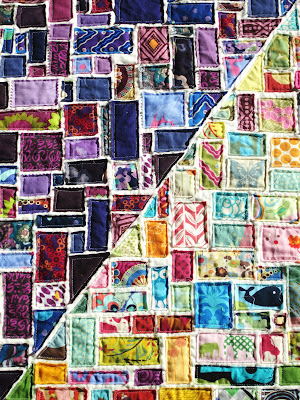 Any guesses of what it is going to end up as?  I'll give you a two clues:
1.  It lives outside.
2.  When it speaks it asks a one word question. 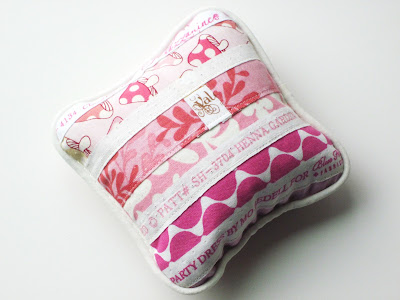 Are you kidding me?  Look at this thing!  A pink pincushion that says Val!!! EEEEEK~!
Last night, a few old sewing buddies (Celeste, Dayna, & Lindsay) and I went out for our annual Christmas/Hanukkah/Festivus celebration.  We all exchanged gifts and had a great time catching up.  I couldn't pass up showing off the cuteness that was given to me. 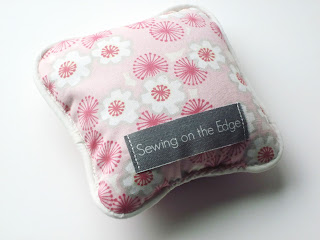 Lindsay has become friends with Cindy from Sewing on the Edge and asked her if she could make a pink "Val" pin cushion.  Thanks to "Val"ori Wells, one of my favorite fabric designers, she was able to put it together.  Isn't is adorable?
~Val
Posted by ~ Val @ PinkPlease! ~ at 9:04 PM 1 comment:

Email ThisBlogThis!Share to TwitterShare to FacebookShare to Pinterest
Labels: pincushions

Have you ever been innocently reading something and come across your own name and been taken completely off guard?  You see it, and it kind of looks familiar, but since you didn't type it, and it wasn't directly sent to you, your brain doesn't exactly register that it is actually you?  This happened to me this week.  I was catching up on some of my favorite blogs, when all of a sudden I saw my name in print right before my eyes.  It took awhile for my synapses I register that it was me. 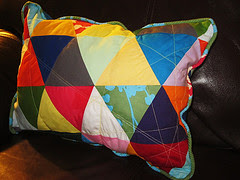 Kati, of from the blue chair, had nominated me for the Liebster Award.  The Liebster Award recognizes awesome smaller blogs with less than 300 followers.  Good thing she tagged me when she did because I'm almost over the 300 follower hump!  (just 297 more!)  :)
Kati is a busy mom, who never seems to slow down.  I was lucky enough to be matched up with her in the Flickr Pillow Swap Talk 4.  I had already been a follower of her blog, and when I was told I needed to make a pillow for Kati, I was completely intimidated.  Luckily, I think she liked it!  Here's a picture of the pillow I made.  Without ever officially asking her, I have adopted Kati as my blog mama.  She has taken me under her wing and has shown me the ropes of this crazy blog world.  (Thanks, Kati!)

Here are the rules of the Liebster Award:
Inform them and post directions to your blogspot. Please don't tag people who already have 300 followers. The goal of this award is to get more publicity to blogs that are good, but not so well known (yet!!!).
Here is list of favorite blogs under 300...
1.  Ellesquare.  Lindsay is a very talented crafter, sewist, editor, Master Gardener, felt rosette maker, dog lover, speed reader, jam maker, & great great friend.  I know I'm missing a few hundred adjectives that describe her, I just think you guys will see for yourself when you start following her blog. 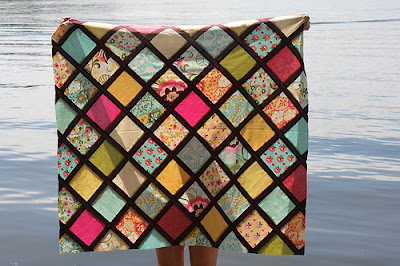 2.  The Quilt Engineer.  Ok.  This woman is incredible.  All I can say is she makes me want to have more babies so that we can become B.F.F's and then she can send me one of her AMAZING baby gift baskets (which include a baby quilt, handmade quilted ball, and a matching bibs, onesie & card).  Seriously?  Seriously! 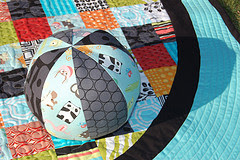 3.  The Quilting Edge.  Marianne is an amazing quilter.  She is not afraid to step outside the box.  Her quilts definitely leave me speechless!  Please check them out! 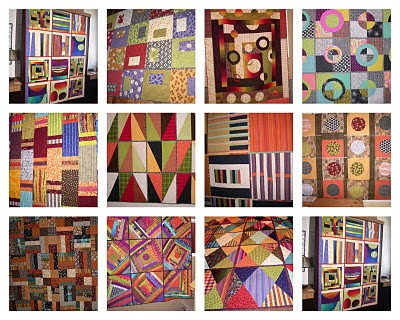 I hope you this leads you to a few new sources of inspiration!

Check out this amazing giveaway over at Lucy & Norman!! 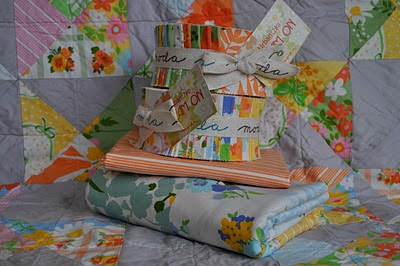 A Stitch in Dye has a nice giveaway as well. 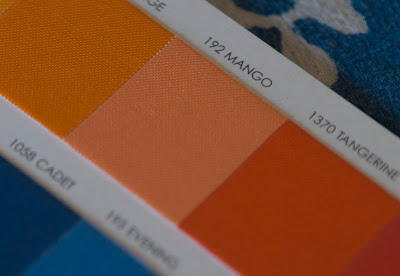 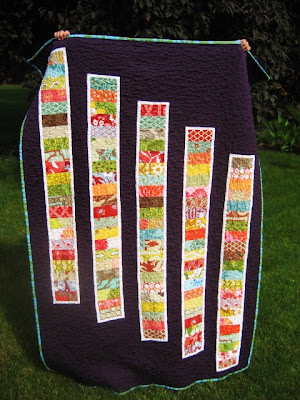 I'm sure you've all been there.  You've made a quilt as a gift for someone and you just didn't want to give it up.  That was the case with this bad-bad baby (as my son, Ethan, would say).  I knew I wanted to make a  stacked coin quilt for my Mother-in-law and had picked up two charm packs at the Missouri Quilt Company; Joel Dewberry's Deer Valley & Valori Well's Delhi.    The colors are bright and fun and mesh really well together.  My friend, Lindsay, and I love these quilts so much that we started a Stacked Coin Quilts flickr group for everyone to share their photos of their stacked coins. 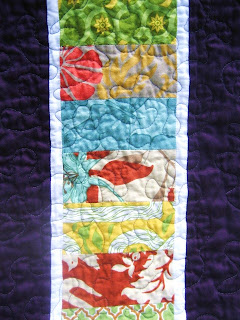 I cut all the fabric from the charm packs in half and sewed them in 5 long strips. I accented each strip by adding a white border to make them pop.  I wanted to make the layout slightly different than the original stacked coin quilts that have the strips all lined up in a straight row.  I thought about maybe slanting one strip off kilter or maybe having 4 of the strips in a row and one lower than the rest.  I ended up stair stepping the strips.  The background is a dark purple sateen that is super soft. Amy Butler's coriander print was used for the binding!!!  This was only my second time free motion quilting.  I really love the look of it, but hate the fact that my thread breaks every time I try to do it.  Any suggestions on how to fix this problem? 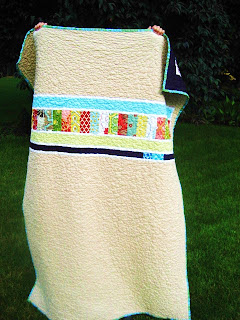 The back:  I had it all layed out and my husband, Matt, had me add the little blue scrap because he said when he studied Native American art at Wabash College, the Indians would add something random to their piece to "ward off the evil spirits."  Looks like the coast is clear with this quilt! 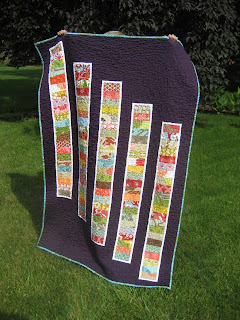 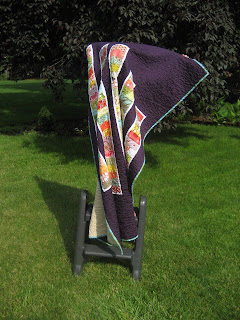 When it comes time to take the pictures, the only person at home when the sun is shining, tall enough to help me, is my 5 year old son.

He has to stand on a step stool and hold the quilt straight up over his head for much longer than he would like.  I'm sure you've all done this yourself and know how much it hurts your muscles.  I finally get Ethan to cooperate with me and then the wind decides not to. 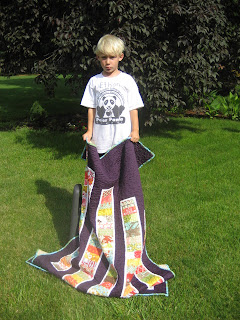 I think this photo shoot is over!

What to do with chalkboard fabric? 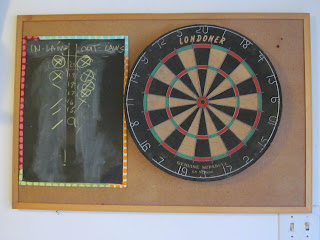 Each year, we have a few friends over for New Year's Eve.  This year, my husband decided it would be fun to play darts in the garage after all the kids went to bed.  He asked me if we had a chalk board so we could keep score of game.  The perfect solution = the chalkboard fabric placemat that I made for the boys!  Just pin it to the cork board and it's ready to go.  It also withstands an occasional "miss" from the dart board.
I found the fabric at my favorite fabric store, Always in Stitches, about a year ago.  Using Pellon Wonder Under I attached a piece of solid fabric to the back of the placemat.  To attach Wonder Under you have to iron it onto the first piece of fabric, then remove the sheet of iron safe paper and then iron it on to the chalk board fabric.  I managed to ruin only one of the three placemats that I made, finding out the hard way that you can't iron chalkboard fabric using the "cotton" setting on your iron.  It will warp severly!  After the back was attached, I sewed the binding on the front and hand stitched it on the back. 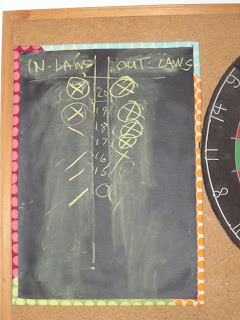 It almost looks like art on the garage wall.  Makes me smile every time I pull into the garage!
Posted by ~ Val @ PinkPlease! ~ at 8:25 AM No comments: