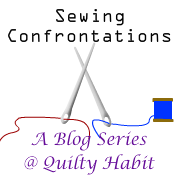 I recently was asked by Jessica of Quilty Habit to join her Sewing Confrontations Blog Hop.  The objective of this Blog Hop is to feature different bloggers that are tackling a sewing challenge that they have wanted to try forever, but never have.  I knew exactly what I wanted to tackle....The Ruffle!  I had pinned this tutorial by Sweetwater on how to make a Ruffled Kitchen Towel and knew that was what I was going to attempt.

Before I get into this post, I wanted to thank Jessica for including me in this Blog Hop and also for giving me a push to try something new.  It is so easy to just "pin" a project onto a Pinterest pin board to make "someday".  Once I got started on this project, I realized how easy and fun it was.  I just needed a little encouragement.  Thanks, Jess!

I had two goals for this Sewing Confrontation.  One was to learn how to make a ruffle and the other was to make this towel out of only fabric that I had at home.  I did not want to have to spend any money on it.  One goal I met, the other I was super close to meeting.

I had purchased this off-white waffle fabric from Joann Fabric's quite awhile ago.  It went straight into my stash for a rainy day.  What I like about this fabric is that it is soft and the grid lines in the fabric it make it easy to cut straight. 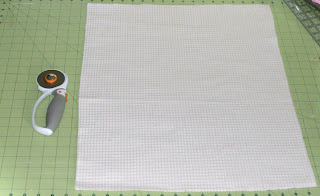 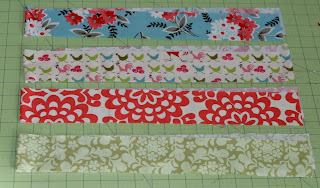 I turned the bottom each up 1/4" and pressed.  Then repeated that again and top-stitched the fold into place to create the hem. 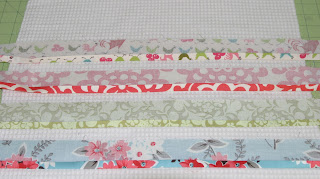 This is when you make the ruffle.  I discovered that if you pull the top threads (not the bottom bobbin threads), it ruffles very easily.  When I first attempted to make the ruffle, I was pulling both the top and bottom threads at the same time and nothing happened. 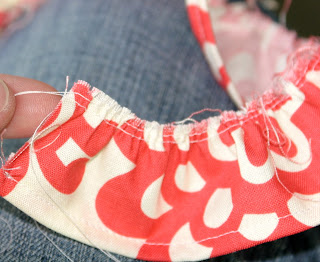 I pulled the threads so that the ruffle was as long as the waffle fabric. (Sorry, this picture doesn't really coincide with the sentence I just wrote.)  Imagine this ruffle was stretched out in a straight line.

After I pinned the ruffle onto the waffle fabric, I added twill tape on top of the ruffle to cover the raw edges.  This is where I did not meet my goal of not purchasing anything.  I have never used twill tape before so I did not have any on hand.  I was going to try to make something to cover the raw edges out of fabric I had on hand, but then just sucked it up and went out and bought some twill tape instead.  Let me just say, it is WONDERFUL!  It is so easy to manipulate and made this project look finished and clean.  I sewed twill along the top and bottom of the twill. 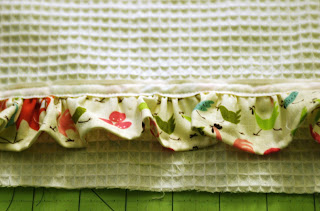 I added the next ruffle and covered it's raw edge with another strip of twill tape. 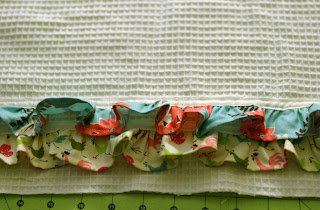 Fast forward...Four rows of ruffles each with twill tape covering each raw edge. 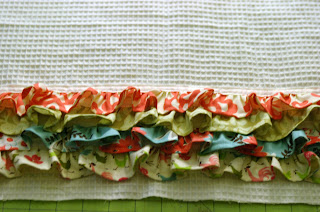 I then folded over the edges all the way around the outside perimeter of the towel 1/4" and then again over itself another 1/4" and top-stitched it into place.  One challenge I had was when I was sewing the edge where the ruffles were, the thread kept breaking and I was afraid my needle was going to break.  My friend, Lindsay, gave me a heavy duty needle and that did the trick!

Ta Dah!  I did it!  It feels so good to have tried something new and actually succeeded in the project! 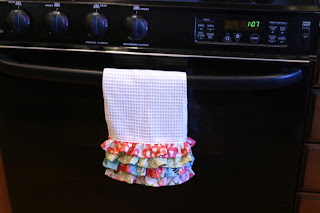 Now go check out what the other girls are attempting in their Sewing Confrontations at the Blog Hop: